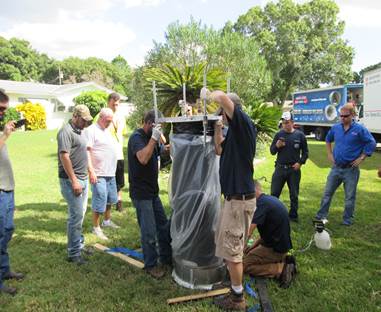 When people think of paradise, they think of sunshine, warm temperatures, and Florida, and that includes those in Tampa. But what you don’t think about are the streets of this paradise flooded with 20 million of gallons of sewage and wastewater daily.

Well, it almost happened if city workers had not come across a sewer line issue while making a different repair.

The location of the issue would have meant catastrophic ramifications to the city of Tampa and its residents. Nearly 400 feet of concrete pipe, carrying 1/3 of the city’s sewage and wastewater to the treatment plant was ready to burst.

The 54-inch pipe was installed in 1986 and at the time, the installers didn’t realize a slight incline at one point, thus creating an air pocket that continued to grow over time. The hydrogen sulfate from the sewage combining with water created sulfuric acid, which continued eating away at the pipe for years.

City workers found the problem when they recently went to install an unrelated piece of equipment along the same pipeline and immediately declared an emergency.

More than 400 feet of pipe was relined and it’s expected to last approximately 100 years.

If you are looking for information on protecting, lining and repairing pipes, or for the nearest installer, contact Perma-Liner™ Industries today. Perma-Liner is the leading manufacturer and supplier of trenchless pipeline rehabilitation equipment and materials in North America.

For 20 years, we have developed systems to rehabilitate existing sewer systems without excavation. Our experience in the CIPP industry has allowed us to design, patent and manufacture state of the art technology in order for us to repair structures without excavation.